▶ Next
Back ◀
Japanese Korean

After watching Nazca Lines, I went to eat lunch together with the owner of guest house. 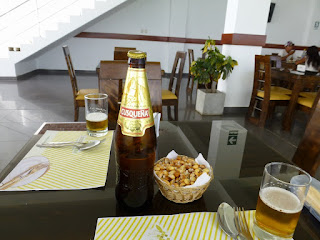 There were cusqueña made in Cusco, and corn.
corn is a large grain. 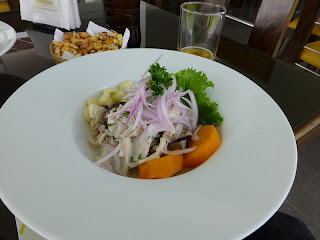 This is ceviche.
There are such seafoods as raw fishes, octopus, shellfish, and shrimp. and onions are on top of them.
This ceviche was extremely sour as acid lime was effective. 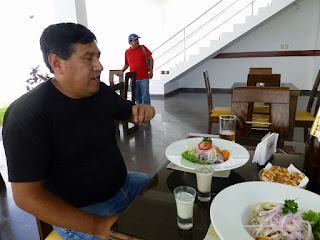 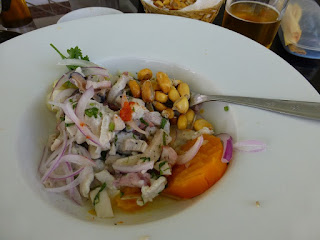 He told me how to eat the corn, to dip corn into the soup.

Sour drool comes out just to see photos. . .
We paid one's own way although I paid whole beer.
He took away ceviche for wife.

Ceviche was too sour for me.

He recommend the ruins tour afternoon. but I told him that I will walk around the town and go Antonini musium. so we went each way.

There was Maria Reiche in the first picture.

Museo Didáctico Antonini
I arrived at the Antonini musium to walk about 20 minutes. 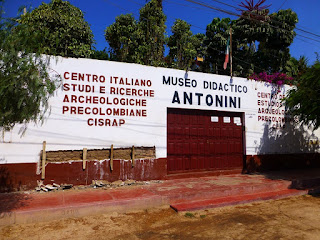 This was archaeological musium which is managed by organization of Italy, where the excavations of Nazca are on display.

* I wrote doing re-check as much as possible thereafter. but I may have written the wrong thing. 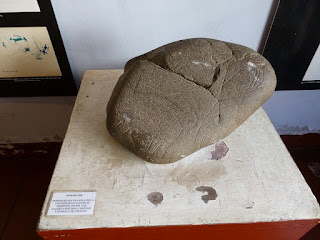 Snakes, felines, birds, lizards, and fish etc. are drawn.
It seems that these petroglyphs were made from about 1000 BC to 5-7 century AD.
The research found that it was developed mainly in agriculture as no hunting scene was drawn, and it was lead the culture of water and breading as so many animals were drawn. 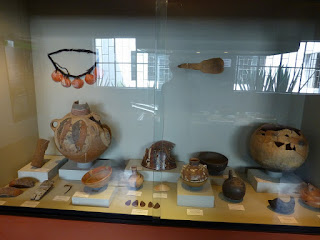 Ceramic seems to have been developed for a long time.
Though there was something like similar in Europe,  it is not known about the origin or the relevance.
It seems to have been divided into 10 phases in chronological order based on the materials and shapes.
But most had been buried for twice geological disasters which occured once in about 350-600 AD, second time in about 1000-1200 AD.

○Geoglyphs
I read the explanation of Nazca Lines.
It seems to have been divided into 3 phases with the times.
The first is Chavin period, when it is around 500 BC - 300 BC. geoglyphs were drown with stacked stones.
The second is the phase between 400-200 BC. though what it was previously drawn was andine rain bird, it was replaced sea divinities. open wings means the symbol of the water supply. colobri bird also means to suck nectar from flowers.
The third is 200 BC - 500 AD when almost geoglyphs were drown. the square had became rectangle or trapezoid, triangle. it is believed that this large rectangles had been used in religious rituals in which important people gathered.

In addition, there were many exhibits.

Antonini museum, it was a good to go.

Walking in the Nazca town
After I went to the Museum, I came back to guest house walking around Nazca town.

○Drugstore
At first, I went pharmacy.
Then I bought ACETAZOLAMID which is the medicine for altitude sickness.
This medicine needs a prescription if bought in Japan. so I bought here 3 tablets showing paper the name of medicine was written.

And once I returned to guest house.

(I) I would like to see sun set in Mirador observatory. How can I go?
(Owner) You can go by bus of Soyuz company. their bus will go out every 30 minutes. and you can go for only 3 sol. you should start 5 o'clock for seeing sunset. in return, all bus passing through this is available to come back this town.

He also wrote a note how to go. 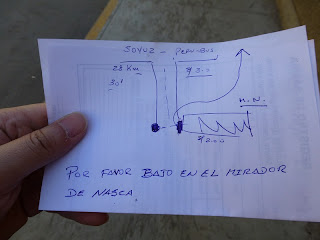 I didn't have any room. I used the shower on the roof terrace, and I waited for a while until departure. 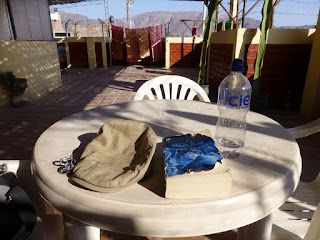 maruton
I love to travel around the world.